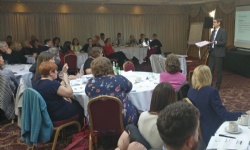 Stephen Long HMI, Assistant Regional Director for the South East Region urged ODBST school leaders to take part in the consultation on Ofsted’s plans for a new framework for inspection of schools. At out termly leadership conference, Stephen outlined the changes to inspection and listened carefully to the feedback from headteachers and Trustees on the impact of changes on schools. The new system, which is set to be used to inspect schools from September 2019, will place greater emphasis on the school curriculum which formed the basis for the rest of the conference discussions.

Headteachers noted the value of hearing from Stephen and described the conferences as “productive” and having an ”instant impact on the thinking about developing a broad and balanced curriculum.”